In the short time that Scott & I have been stewards of this wonderful place, we have realized that so much of its vitality lies outside the doors. This is a place that you can come to, and not need to leave during your stay, other than to wander to the village for a pastry and coffee for a quick bite, then back to an Adirondack chair by the pond. This is a big part of the beauty of Pilgrim’s Inn. In the winter after we moved here, we realized quickly that we were not the only inhabitants on our small parcel. Wildlife abounds, just outside the door, if you just spent a quiet, still minute looking for it.

As spring started to make her way to our beautiful island, we noticed lots of activity out on the pond. Scott was quick to find our binoculars, and we went to the Pilgrim’s Inn library to locate a book on Deer Isle waterfowl. After a few days of watching the entertaining mating rituals of the Buffleheads and Common Mergansers, we started referring to them as “the formation” or “the armada.” They would gather and cruise across the pond in force, sometimes lifting and skimming across the top of the water, other times, just fluttering wings in a big showy act. Even now in September, I still see groups of ducks floating around out on the water. I have a lot to learn about birds and ducks, but I was happily surprised to see that the groups were still together in September.  The past few weeks, I have noticed a pair of cormorants out on Mill Pond, too.

My favorite bird story has to do with the seagulls. After a winter of moving, unpacking, and trying to figure out how to run our new business, there were moments when I would be in deep thought about something. Sometimes it was me thinking about how I had been approaching something wrong. Sometimes it was the opposite, thinking I had handled something particularly well. I would go outside, between the inn office and our space, back and forth, in and out, all day long.  It was as if the gulls could read my mind. In a humbling way, they would always provide a timely giggle as I hurried along from one door to the other. That giggle would get interpreted by me accordingly – either they were cheering me on, or laughing at my mistakes. Like I said, the gulls can be humbling, and that isn’t a bad thing.

Early in the season, we hosted a coffee and pastry session for an annual birding event called Wings Waves and Woods, put on by Island Heritage Trust. The participants gathered for coffee hour in between tours and a speaker gave a short talk. While people were either relaxing or wandering the grounds, several people pointed out that they had seen a variety of birds onsite. Among the noted birds, they confirmed yellow warblers and oven birds. A guest that stayed here over Fourth of July week actually was kind enough to make us a list of what he spotted. Here is what he found in the Pilgrim’s Inn backyard:

This time of year, while the garden is still in bloom, that seems to be the most active area. Bees, butterflies, even hummingbirds abound. From our perch above the dining room, we have a great view of the garden. It took me a few tries to identify that they were indeed hummingbirds, because they are so quick and fleeting. They blended right in to the jungle of raspberries. The nasturtiums we grow for the restaurant are colorful targets and food sources, so it brings every bug, butterfly and bird out in the open for all to see, if you were to just look.

Winter snow sheds a whole different view on the property. After a fresh snowfall, when the temperatures dip very low, you can often hear deer crunching out in the snow. If you can’t hear it, it becomes obvious in the morning, with tracks everywhere. One day it looked like they had a party the night before. It is funny to think that so much activity occurs out there after dark, to which we had no idea it happened, until morning. I hope they had fun, and got some good stuff to eat. 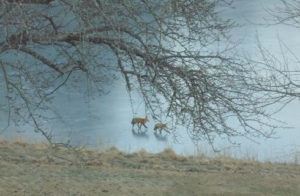 Foxes on the frozen Mill Pond at Pilgrim’s Inn

And then there are the fox. In early spring as we were readying the inn for opening, I was up in Room 4 when I happened to look out the window. At first, I thought it was a puppy. Then there were two, and they definitely weren’t puppies. They were running and jumping and playing out in the back lawn. I tried to get a few photos, but they are fast. Another foggy day, at twilight, I happened to glimpse a fox in front of Mr. Whale. I did get a photo of that.

We are busy. This is our first season as innkeepers. There isn’t a lot of free time. Despite that, if I take even just a minute to look and listen, I can see a lot of life around me. Little moments like that make it all so special. In the winter and spring, before we became so busy, I had a daily ritual. Each time I would come out the door, I noticed the salt air, the smell of the mud flats at low tide, it was all so different from where I had come from. Each time I caught a fleeting glimpse of Mill Pond in the distance, or Northwest Harbor across the street, I would have moment where I thought, “Wow, this is my new home. We are lucky to be here.” Sometimes in the midst of the macro, you need to consider the micro.

We hope you will book a stay at Pilgrim’s Inn soon. We want you to experience all of the natural joys of our area, just like we do. Take a look at our Specials and Packages and make time to unplug and enjoy nature, at historic Pilgrim’s Inn, off the beaten path but worth the trip.